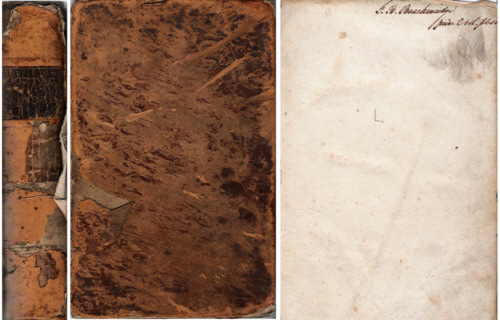 This Bible and related material was submitted by Nick Nejadeh
(azboater@cox.net) and it contains a wealth of information about
this family and related families, possibly collected for the purpose
of joining the Daughters of the American Revolution. There are a
lot of images here and I found that I could not transcribe them all.
I ask for a volunteer here to come forward and transcribe the rest.
I have sat on it long enough -- transcribing some, and procrastinating.
This entry deserves better attention, and I do not want to leave it
unposted just because it remains partially untranscribed. The number
of persons related to this family must be enormous.

Nick would like to get this Bible returned to family members.
UPDATE!!! Nick has returned this Bible to a great-grandson of
John B. Breckenridge and Mary Ehrenfeld currently living in South
Dakota. The family was having its genealogy researched with the
help of a genealogist, and got a little more than it expected from the
research. The family is said to be thrilled with the Bible's return.

It is possible that this entry on Bible Records Online sets a record
for the sheer amount of genealogy information stored in one family's
Bible. Thanks, Nick, for sharing it, and taking the time to get it all
scanned in.

The obituary for the matriarch of the family, Sophia Breckenridge,
is very warm and touching. I have read obituaries for women that
never mention their first names, but this one is very poignant. It is
also pretty obviously written by her son, S.F. Breckenridge, as all
other relatives are pushed to the background while he and his whole
education and profession come front and center.

Also of note is Paul Howard Baldwin who married Dr. Caroline Marcy
in April of 1909. That was unusual for the time, when there was only
a few women's medical colleges in the country, and most others
didn't allow women. She was indeed a medical doctor and they later
went on to have three children, as below.

N.B. --the letter a before e should be written e in the names following

W.H. Breckenridge was married to Jennie Ashworth Thornton August 20th 1884.
(Virginia) [Virginia is in the margins between this entry and the one above it].

The name should be written Breckenridge with an e before c. J.C.

[There are some additional comments on this page that were added at a later date.
I have not transcribed them for lack of time, and lack of a clean way to differentiate
those comments from the original. Please refer to the scans for those comments,
which refer primarily to who baptized which infant.]

Children of J.B.B. and Mary Sophia Brackenridge [written in
the margin]

George Augustus Breckenridge died near Vicksburg Mifs. on the ninth of August
1863 aged 22 years 5 months and 27 days, a soldier in the service of the U. S.
Light Battery Pa. Vol. 152 Reg. Co. A. Steamer Baltic Mifs. Marine Brigade. He
died in the floating Hospital Woodford and is buried in the state of (Mifsifsippi)
Louisiana directly opposite Vicksburg on bank of the river Mifs.

She was born at Philadelphia, November 12, 1811. She was the oldest daughter of
Medical Doctor Augustus Clemens Ehrenfeld and sister of Revs. G.F. (deceased),
A.C. and C.L. Ehrenfeld. The deceased has left to survive her, her husband, now in his
88th year, her oldest son, Prof. S.F. Breckenridge, Sc. D., D.D., of Wittenberg College;
also two other sons and three daughters. One daughter and two sons preceded her
into the world of spirits. Of these sons, George Augustus was given a sacrifice to his
country in the war for the Union and liberty, he having died in the army at Vicksburg. The
other deceased son left a wife and two children, who have likewise answered the
summons into the other world. Beside these we laide the body of the mother and
grandmother, where now side by side "they softly lie and sweetly sleep" awaiting the
resurrection morning.

The deceased was a very extraordinary woman. This, those who knew her best will
testify. The broken health of her husband devolved on her the responsibility of her
family, and she carried it with unfaltering faith and courage through all the years. She
has entered into a great reward, if such there be for a heroic wife, a faithful mother,
a steadfast Christian woman, and a courageous spirit at all times. The wasting of disease
and weight of more than four score years could not rob her dear face, even in death,
of its strength and sweetness nor the expression of repose that marked her character.
She was a rare spirit. Her biography is written in heaven. "Blessed are the dead
which die in the Lord: yea, saith the Spirit, for they rest from their labors and their works
do follow them." This was the fit scripture from which the minister spoke at her funeral.
C.L.E.

Paul Howard son of Robert B and J. E. Baldwin was married to Dr. Caroline
B. Marcy daughter of L.A. Marcy April 27 1909

[Incorrect entry about Genevieve below (giving her different parents) crossed out,
indicating that these entries were copied from somewhere else? Written by someone
with bad memory?]

A verbatim transcript of the family record taken from the family Bible
of Samuel Brackenridge of Fayette County, Pa. made by S. F.
Breckenridge, Oct. 14, 1898.

This copy was sent from S.F. Breckenridge to "Sister Mary" from
Springfield, Ohio on October 14, 1898. He is seeking genealogy
information, death dates and such.

Dear Sister Mary:
Inclosed with this you will find a transcript of
the family record taken from the family Bible of our grandfather
Samuel Brackenridge. This is the third copy I have made. I have sent one
to Mrs. Elixabeth A.N. Breckenridge and another to Mrs. Eliza Scarbrough.
I have copied with care. I do not think there are any errors in it.
I wish you would get the following mentioned dates for me if you can.
What is the date of the death of Joseph Jacobs? Ask Will. if he was
still living at the time we visited up the Monongelela several years
ago. Was aunt Maria living then. I think not, but would like to have his
corroboration, or otherwise as the case may be. Maybe that
the fact that our visit was not long after the acquittal of Jim Nutt. This may help to
get the year which is about all I care about.
The date of the death of Joseph Jacobs and the year of our visit
to our friends in Fayette County.
I believe I have not heard from Rochester since I left. Are any of you
sick? Let me hear from some one.
We are in about our usual health. I have been out some with Samuel hunting
hickory nuts and walnuts. We got some but he has had bad luck with them.
One morning when he got up he found that some one had stolen all his hickory
nuts and the most of his walnuts. He is a pretty bright boy but
extremely lazy about studying. I drill him a little each evening in
Arithmetic, but he would rather be at something else.

Yours as ever,
S. F. Breckenridge

A verbatim transcript of the family record taken from the family
Bible of Samuel Brackenridge of Fayette County Pa. made by S. F. Breckenridge, Oct. 14th, 1898. Any comment is placed in brackets and signed S.F.B.

In the memory of David Brackenridge who died in the year of our Lord one thou (so, S.F.B.) Eigt (so.S.F.B.) hundred and Fourteen on thursDay (so.S.F.B.) the first day of September Between Six and Seven 0clock in the evening.
As you are now so once was I:
As I am now so you must be;
Prepare for death and follow me.
Eaged (so, S.F.B.) five years and four months and three days.

Sacred to the memory of James Brackenridge was born July 13th 1813 and took his abode in the bosom of his Redeemer on the 20th of December 1814 on tuesday between nine and ten o'clock in the morning. aged 17 months and 7 days.
Weep not for me my Parents Dear,
To grieve it is in vain.
Christ is my hope you need not fear
We all shall meet again.

James LaFayette Brackenridgez son of Samuel and Jane Brackenridge died in the service of his country on the 22nd day of December Anno Domini 1864.

Jane Brackenridge Died November 19th 1874 Aged 89 years 5 months and 14 days. (She died in Fayette City Pa. at the home of her daughter Maria Jacobs, and the entry of her death was made in the handwriting of some one of the Jacobs family. S.F.B.)

Rev. John Brown Brackenridge died at Rochester, Pa. Sept. 20thm 1898, aged 91 years, 10 months, and 20 days. He passed away as quietly as an infant going asleep. Blessed are the dead who die in the Lord.
(This entry is made in my handwriting, S.F.B.)

(The Bible from which this transcript has been made was presented to me by Mrs. Elizabeth Ann Nutt Breckenridge several years ago upon the occasion of my visit to see her and other friends at Brownsville, Fayette City and Uniontown, Pennsylvania. I left it, however with my father at Rochester, Pa. Upon his decease I brought it with me when I came home from his funeral to Springfield, Ohio. It is my intention to give it to my oldest grandson, Samuel Shaffer Breckenridge.)

This is the family information of David Breckenridge of Garwin, Iowa,
summarized in a letter from S.F. Breckenridge, studying at Wittenburg
College in Springfield, Ohio, on July 19, 1901. He paid them a visit
about that time.

[Descent Notes -- for May Baldwin?]

These are notes that begin "I am the daughter of Paul H. Baldwin, born Nov. 14, 1876..."
and continue, concluding with comments regarding Henry Stitzer acting in the capacity
of a soldier. I assume this was preparation for -- May Baldwin? -- to apply for one
of the DAR or related groups.

This is a letter on letterhead of the city stating some information about Henry Stitzer.
It is signed by C.L. Ehrenfeld. It looks pretty official, but I think it is just the statement
of C.L. Ehrenfeld of what he or she knows, rather than an official statement of the city. 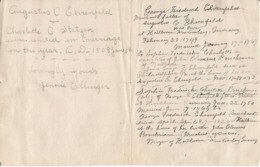 This is a letter from Jennie Ellinger in rather juvenile handwriting regarding the Ehrenfeld family.
She mentions some facts but not sources. It is dated January 11, 1918, Abbyville, Kansas.
On the other side are some other statements about the family in another handwriting.

[Family Tree Drawing on Back of Legal Letterhead]

This is a sketch made on the back of the letterhead of Paul Breckenridge, Attorney in Los Angeles.
Coincidentally, the Family Record of Samuel Breckenridge above has his address on it, like it was
later sent to him. Maybe all of this was in his possession.

What I find interesting about this document, is that it contains reference to the line of Breckinridges
that moved to VA and then to KY, including by name Preston Breckenridge, whose Breckinridge
Bible is also on this site. Small world.