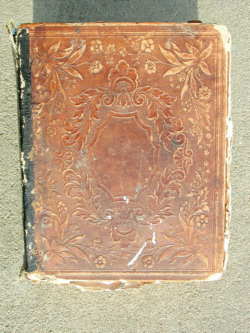 " I was trying to date this bible but the first few pages are missing. I did find publisher's name a page before the New Testament that I sent previously. I searched the publishers name on the internet and found your site. I see this was a fairly common bible in the 1850s.

I have done extensive genealogy on my family and have considerable detail on all the people mentioned in the attached articles. I attached a biography of my GG Grandfather Brigham Foster who first owned this bible He appears to have been a 'mover and shaker' within his community in Tracy, Minnesota. The bio was not in the bible. I found it in a genealogy center in Murray County Minnesota. It does provide some perspective though on the travels of the bible. Brigham's last surviving child, Enoch, gave it to one of my aunts in the late 1940s in Williston, North Dakota, where Enoch had settled after a career in real estate. She gave it to me a couple years ago.

I have considerable information regarding all the people mention in the attachments if that is useful in the future to anyone else who contacts you. R.C. Foster mentioned in one attachment is my G Grandfather. Mr. L. H. Todd was Mary (Cook) Foster's brother in law. Seymour Foster, shown in the birth page, is my Grandfather. Homer Cook, Carrie's father, was Mary's older brother.

One thing you may find interesting is that there is historical site in Wauconda, Illinois, called the Andrew C. Cook house. His daughter, Mary, was Brigham's wife. I traveled to Wauconda a few years ago, hoping only to find some head stones, and the first I knew about the house was when I saw a traffic sign giving directions to it." --Steven Foster

In possession of Steven Foster. 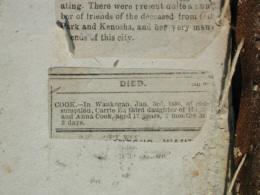 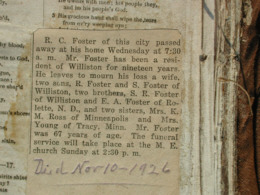 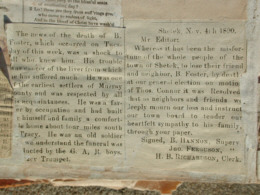 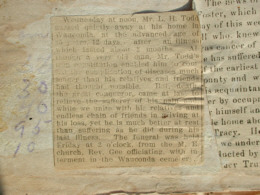 Died last Saturday, Jan 3. Miss Carrie E. Cook, third daughter of Homer Cook of this city died of that child destroyer, consumption. From early childhood the deceased has been afflicted with asthma, and had suffered very much from the disease although her parents called to her aid the best medical skill. About two years ago she was taken to Dakota in hopes of receiving relief, but no help was received. She was then taken south and to New Mexico, where for a short time she seemed better, but the relief was only temporary and she returned home. For a time she seemed better, but it appears the disease changed its form to consumption. All that loving hearts could suggest and helping hands could do, was done for her. But while the end was not unexpected the blow was none the less heavy when she passed away. The funeral was held Wednesday afternoon at her father's home, Rev. Mr. Arnold of this city and Rev F. P. Cleveland of Oak Park officiating. There were present quite a number of friends of the deceased from Oak Park and Kenosha, and her very many friends of this city.