This Bible is in good condition, with the binding in good shape,
but detaching from the pages while remaining in one piece.
Some wormholes in the first few pages. Heavy foxing throughout.

[Page One -- Sheet Pinned to the Introduction Page, with a
lock of blonde hair in a ribbon]

Memory brings him back, but he comes with
His curling locks, his flashing
Eye and the joyous
Voice of childhood, is gone

John A. Freer and Mrs. Mary Hyde married at Cortland 1867 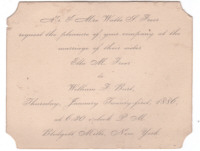