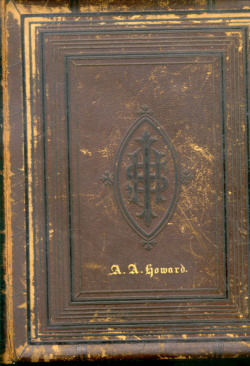 The writing looks to be in the same handwriting,
and possibly at the same time. On the cover is
"A. A. Howard", so I assume this was the Bible of
Augustus A. Howard and not his parents.

This Bible was transcribed by and is currently in the
possession of Tracy St. Claire tracy@stclaire.org