This Bible was submitted by June Jacobs Jordan (jordanaj@sc.rr.com) Nov, 2001. 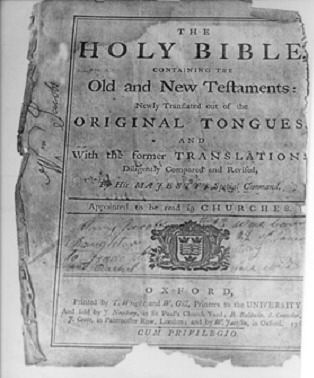 (Note old English spelling "f's for 's's") Printed by T. Wright and W. Gill. Printer to the UNIVERSITY and sold by F. Newberry in St. Paul's ChurchYard. R. Baldwin, S. Crowder, and F. Coote in Paternofter Row, London. And by W. Janfon, in Oxford, 1768. This bible is quite deteriorated and there are no normal entry pages for marriages, births, and deaths. Perhaps sometime over the past two hundred and thirty years they were lost. On the title page is the entry "William Jacobs his bible". On the back of the title page are entries of births. These same types of entries are throughout the margins of this bible.

Note: The Bible was transcribed four different times by the following: Elizabeth Kachele, Corinne Jacobs Dixon, June Jacobs Jordan, and Margaret I. Ketron. The entries have been separated by family after genealogy research. William Jacobs (1737) was born in VA or possibly MD. Most of the family migrated to Adams/Brown County Ohio about 1798.

William Jacobs was born the year of our Lord 1737 November the 11
Ann Peake Daughter to John Peake and Lucy his wife was Born January the 10 1742.
William Jacobs his Bible
"William Jacobs signature on the eve of leaving Fairfax County"
William Jacobs I cany ab [meaning unclear] was Born 1737

[Two lines scratched out in ink]
. . .an was baptized the 20 May in the same year

Miscellaneous entries that we have no idea who they could be:

William Mecrolot was born the 7th of April 1811

Wm ham
Hampton - We believe this entry has connection to the John Hampton, Jr. children who were made guardians to William and Joseph Jacobs. William later married the widow Mary Hampton.