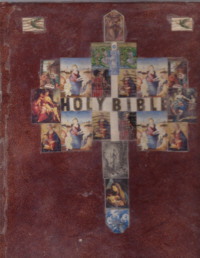 This Bible was rebound sometime -- 20th century, I think,
if the contact paper is contemporary with the rebinding.
The binding was either an amateurish job, or is so thoroughly
covered with the leather-like contact paper, decoupage and
clear contact paper that it looks that way.

This has some neat ephemera in it. A handwritten recipe
note for a Sponge Jelley Cake and a Cream Cake. These
predate measurements and temperatures -- "a piece of butter
the size of 2 hen eggs" it reads in part. Also, hand written
genealogy and a newspaper article titled "Surprised Their
Teacher" (in a nice way). 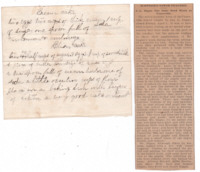 Thomas Litle Was Married to Hannah Degarmo September the
25th 1851

Martin [?] Alexander Litle was Born September the 19th About
3 oclock in the Morning 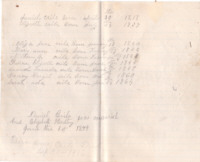 Daniel Crile and Elizabeth Hartley was married June the 1st 1849 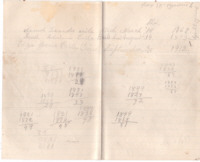