Below this line, is verbatim from source, except for minor
formatting changes.

From the Bible of Joseph McMinn, who was Governor of the state of Tennessee
from 1815 to 1821, and at whose grave in the cemetery at Calhoun, Tenn., the
state of Tennessee has erected a marble shaft; we have copied the following
records:

Second Marriage -- Joseph McMinn was married to his wife Rebecca Kincaid
Jan 5, 1812. She was born in Carter's Valley, Hawkins County, and state
of Tennessee, Oct. 7, 1793, and was the daughter of David and Mary Kincaid.

Third Marriage -- Joseph McMinn was married to his wife, Nancy Williams, at
South West Point, Roane County, and state of Tennessee, on Aug. 4, 1816,
she being the daughter of James and Phenobie Glasgow, and was born in
Greene County, state of North Carolina, April 22, 1770.

Hetty McMinn, daughter of John and Mary McMinn, married to Robert Morrison,
both of Hawkins County, Tenn., on May 11, 1823.

The aforesaid Jane was married to Hugh Campbell, Esq., merchant,
Rogersville, on May 9, 1804, in Hawkins aforesaid, who died Sept. 27,
1804, in Rogersville, aforesaid, of a cholera-morbus, and something like
yellow fever.

Jane Campbell, relict of Hugh, aforesaid, was married to Major James
Gaines, Nov. 20, 1808, in neither of those marriages had she any issue.

Hetty McMinn, daughter of John and Mary McMinn, born May 13, 1801, in
Hawkins County, and on the death of her mother, was adopted into my
family, and was in all respects attended to as one of its members.

Hannah McMinn, wife of said Joseph McMinn died Feb. 27, 1811, of an inward
inflammation, which terminated her life in five days' illness, age 49 years 8 months
7 days, and departed at her own dwelling in Hawkins County, Tenn.

Jane Gaines, wife of James T. Gaines and daughter of Joseph and Hannah
McMinn, died Jan 27, 1815, of what was called the cold plague or epidemic,
in an illness of something less than three days from a perfect state of good health,
age 27 years 9 months.

After the governor's death, through a flaw in the wording of his will, by
which he intended to leave his property to his adopted daughter, Hetty, she
was cut off and the property was all put up and sold at public auction and
the proceeds turned over to the state of Tennessee. This old Bible was bought
by Hetty McMinn Morrison and passed from her to her daughter, Martha Ann
Morrison Knox, and thus to its present owner, Mary Knox Harle (Mrs. Frank J.
Harle of Cleveland).

The record of Joseph McMinn's marriages, his wives' deaths and records
concerning his daughter, Jane, and his adopted daughter, Hetty, are all in the
same handwriting, evidently that of Mr. McMinn himself. The records
concerning the births and death of the children of Hetty McMinn Morrison are
all written by another person, while the deaths of Joseph McMinn and Robert
Morrison are recorded in two entirely different scripts. Mrs. Harle identifies the
writing in which Gov. McMinn's death is recorded as that
of her father, Thos. J. Knox. 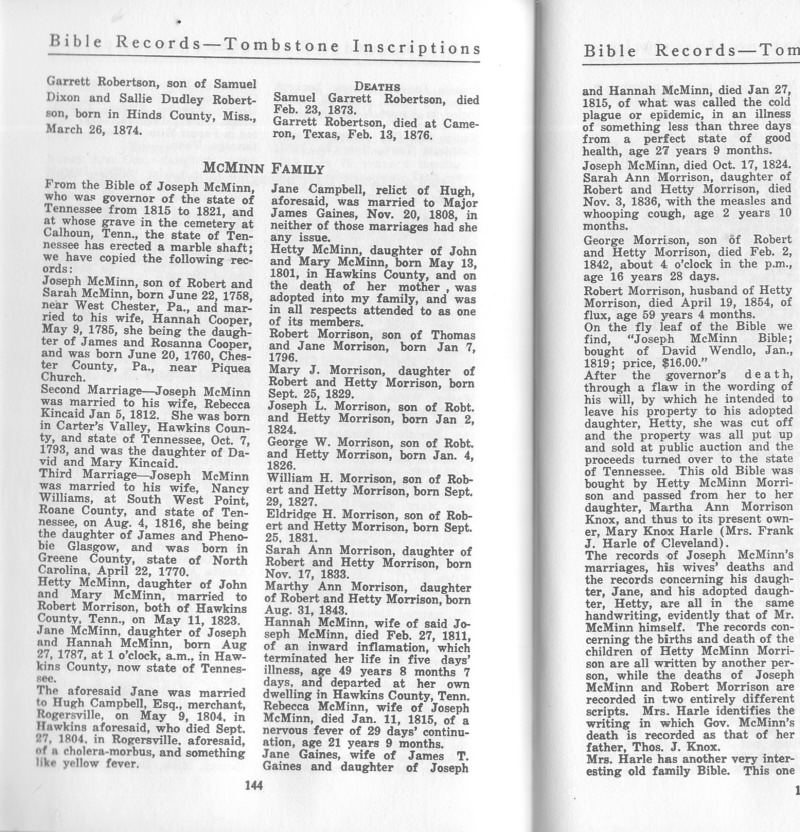