The Holy Bible Containing the Old and New Testaments,
Thomas Nelson & Sons, New York, No Date. Looks 20th
Century. I would assume that it was new at presentation -- there
is a handwriting change between 1930 and 1932. Has a soft
cover that was not meant for multi-generational use.

This bible is currently in the possession of Tracy St. Claire
tracy@stclaire.org .

1960 -- This Bible goes tp Mary Rose. after I am done with it.
Momie Promised it to her [words written over it, illegible]. Dad

James Fleming Merrifield
and
Lilly Dale Meredith
were united in Holy Matrimony on Thursday, the twenty-fourth of
December, at Fairmont, W. Va. in the year of our Lord, 1896. 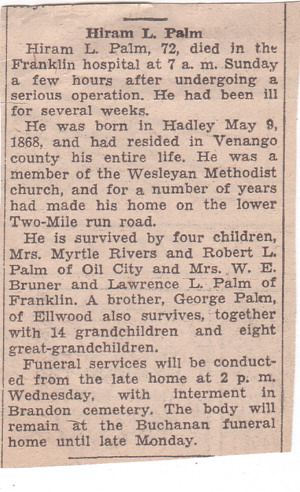 Hiram L. Palm, 72, died in the Franklin hospital at 7 a.m. Sunday
a few hours after undergoing a serious operation. He had been ill for
several weeks.

He was born in Hadley May 9, 1868, and had resided in Venango
county his entire life. He was a member of the Wesleyan Methodist
church, and for a number of years had made his home on the lower
Two-Mile run road.

He is survived by four children, Mrs. Myrtle Rivers and Robert L. Palm
of Oil City and Mrs. W. E. Bruner and Lawrence L. Palm, of Franklin.
A brother, George Palm, of Ellwood also survives, together with 14
grandschildren and eight great-grandchildren.

Funeral services will be conducted from the late home at 2 p.m.
Wednesday, with interment in Brandon cemetery. The body will
remain at the Buchanan funeral home until late Monday.