This is a family Bible and a copy of "The Poetical Works of John Milton" with genealogy information written on the blank pages. These books have stayed together and have quite a history, having come across the Oregon Trail and finally landing in a Salvation Army in Berkeley, CA before being rescued. They are currently in my possession (Tracy St. Claire -- tracy@stclaire.org), but I will return them to a good home. I am looking for a really good home for these books -- direct descendants actively working on genealogy, preferably with descendants of their own to pass it on to, or a reasonable plan to keep it in the family.

Nora Parker Davis sent these Bibles to me in January of 2005. A friend of hers rescued them from the Salvation Army in 1994. She was told they had been there (at Salvation Army) for quite some time. The friend gave them to Nora to investigate, knowing that Nora does family research for her own family. Nora made copies of the information, and filed them with all the right places.

Both books have been well-used and show character. I am adding Nora's own notes and research about the family.

The New Testament of Our Lord and Saviour Jesus Christ: Translated Out of the Original Greek...New York, Stereotyped By A. Chandler for The American Bible Society. 1837. Nonpariel 12mo. Missing all pages prior to the first page of Genesis; identification made from the New Testament title page. I can't find an exact match in Hills (at least with this partial information). No exact match in O'Callaghan (although very similar to p. 246 #4). These ABS Bibles were fairly common.

In the 1860 federal census, Wyatt [sic] Mulvany is found in Browntown, Josephine County, Oregon. He is age 25, single, and working as a miner. It puts his birth place as Iowa, but in a work environment like that I doubt they interviewed everyone. They probably relied on second-hand information.

Below is the 1880 census of the family in District 11, Benton County, Oregon.

Nora's Notes about the progression of ownership, a basic family tree,
and some facts about the family. 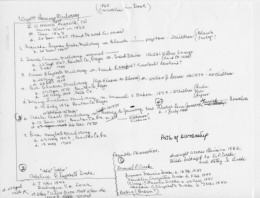 This book was brought across the plains in 1862 [Note: It never says by whom.]

This book belongs to S.P. Drake

later to Adeline and L.W. Mulvaney

Geo. B. January One child

to Wyatt Mulvany in year

[Page Four -- Opposite of Page Three, Back Fly Leaf]

This is Mother’s writing

[Note: Adeline Elizabeth Drake Mulvany was born 7 Nov 1842 so she must be "Mother" who writes the record and that she was 82 last Nove the 7. This then, would have been written circa 1924.]

[Note: Perhaps these are brothers of Adeline Elizabeth Drake who was born 7 Nov 1842 in Dubuque Co., Iowa.

And their parents were S.P. Drake and Betsy (Brown?) Drake?

And did the parents bring it "across the plains in 1862"?

Or perhaps some of the children brought it?]

[Page Eight -- Inside Back Cover]

The Poetical Works of John Milton With a Memoir and Critical Remarks on His Genius and
Writings By James Montgomery. Vol. 1. New York, Published By Leavitt & Allen, 379
Broadway. No Date, but some Internet sources put this book as being published around 1880,
and the binding looks about that era.

Anie Mulvany Was Born in
year September the 22th in Oregon

[in both cases above, space was left blank for the year]

Wyatt Loranzo Mulvany
Was Born in the year 1837 March 11

Adie Elizabet Mulvany
Was Born in the year 1842 Nov 7

Frances Lyman Mulvany
Was Born in the year 1865 Dec 20

Emma Elizabeth Mulvany
Was Born in the year 1870 Aug 20

Daisy Lillian Mulvany
Was Born in the year 1876 July 15