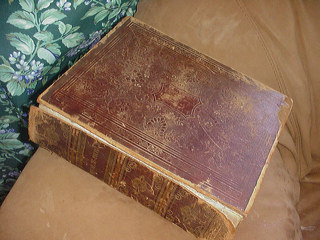 The Holy Bible Containing the Old and New
Testaments Together with the Apocrypha.
Hartford: Sumner and Goodman, 1845. This
Bible is in pretty good shape, but the binding needs
repair. Included with the bible was an obituary,
a hymn, and two sets of hair locks.

This Bible was returned to descendant family of Kim Mumma, from whom it had been stolen.

More information on this family can be found at:

This is the property of Isaac and Mary Mumma

December 11 1877 Mary F. got married to Edger
Hummel in the evening at 7 O Clock

C. Nissley Mumma was Married to Aggie Shope
February 22nd 1882 at 8 O Clock in the evening

My brother Solomon died on the twenty fourth of
Noveber A.D. 1849 and brought his age to 22 years
1 month an 10 days