This Bible is structurally failing with spine and cover damage,
but is still intact with original binding, some dogears and
foxing. It is a nice piece.

Although it is not explicitly stated, this Bible most certainly
originates in Hancock County, Maine, because the towns
mentioned are all located there, and the surnames are
those of settlers in that area in the early 1800s.

Almost all entries are in the same purple ink, all the way up to
1872, so it is possible they were all entered at the same time
after 1872, despite the early publication date of the Bible.
Flora's marriage, and death less than a year later, are written
in the same handwriting and pen color.

There are many leaves and flowers within, and a religious tract
and punch-handiwork. Of interest is a "Table of Descents"
listing the ancestors of John Stiles, although no place names or
dates are mentioned, and the connection of John Stiles to this
family is unknown. It looks to be early 19th century, and pulled
from a book. Surnames in this piece are: STILES, BAKER, GAY,
KEMPE, THORPE, WHITE, WARD, BISHOP, WILLIS,
CARTER, BATES, HOLLAND, WILSON, BROWNE, KING,
SMITH and GODFREY. 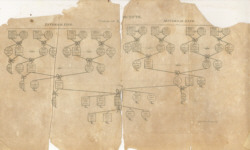