This Bible is missing all title pages, making it hard to identify.
It also shows signs of being rebound. The dedication date
of 1875 might be close. The pages have gilded edges,
which indicates the last half of the 19th century, but the color
of the endpages (salmon) seems a little earlier, maybe 1830
through 1870.

This Bible is in fair condition. The one board is detached, and
the spine suffers. The old spine is behind the new one. The
family records are also pulled away from the binding except for
the last page of the Old Testament. It is possible that the page
gilding was done when it was rebound.

The LDS site puts the birth of Pierre Parsells and his marriage to
Lavinia Boyd in Brooklyn, Kings, NY.

Transcribed by and in possession of Tracy St. Claire,
.

Obituary Clippings:
BEATTIE--On Sunday, January 26, ELIZABETH SAXTON BEATTIE,
in the 71st year of her age.
Relatives and friends are respectfully invited to attend funeral services
at the residence of her brother-in-law, Eugene S. Boyd, 106 Fort Greene
place, on Tuesday evening, January 28, at 8 o'clock. 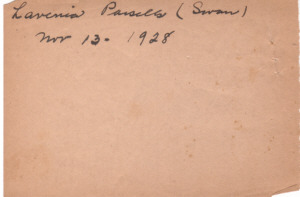