This Bible record was separated from the Bible.
The pages look to date around the early-to-mid 19th century.

This family is found in Washington, Logan County, Ohio
in the 1860 US Federal Census. All were born in Ohio,
except for Jonathan who was born in Virginia. The family
appears to be quite wealthy. Jonathan and his brother
Isaac lived on nearby property and purchased a parsonage
for the church. Both the Plum and McKinnon families appear
to be quite prominent in the area, with Sally related to
William Henry Harrison.

Several of these people are buried in the Plum Cemetery
in Washington Township:

Transcribed by and in possession of Tracy St. Claire,
tracy@stclaire.org. 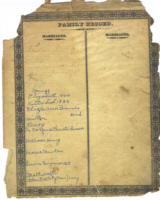 Jonathan Plum was Born on the 8th day of February 1808

Kitty Plum was Born on the 1 day of September 1842 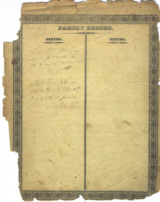 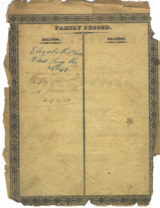