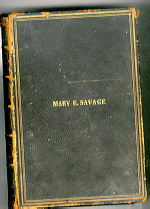 This Bible was purchased from a used bookstore in
Alabama.

Mary E. Savage is embossed in gold on the cover.

This Bible is currently in the possession of Tracy St. Claire
tracy@stclaire.org

Undocumented sources on the Internet place Sarah
Chauncey's parents as Elihu Chauncey (b: 17 Jan 1779 in PA)
and Henrietta Teackle (b: 1770 in VA). Sarah is placed as
being born in Burlington County, NJ.

I recently transcribed and posted the Chauncey Bible which
confirms the connection between Elihu Chauncey and Sarah
Savage.

William Lyttleton Savage was born the 5th of September 1812,
about 11 o'clock p.m.

William Lyttleton Savage and Sarah Chauncey were married the
11th of June 1840, about 1 p.m.

Mary Eyre Savage, second daughter of William Lyttleton and
Sarah Chauncey Savage was born the 20th of March, 1845
at 25 minutes after 10 'clock, a.m.

Albert Lyttleton Savage, fourth son of William Lyttleton and
Sarah Chauncey Savage, was born the 3rd of January at 14
minutes after 8 o'clock p.m. [date missing, not a typo]

Henrietta Chauncey Savage was married to A. Charles Barclay
on the 17th day of January 1867

Mary Eyre Savage was married to Joshua Ladd Howell on the
15th of April 1875.

Evelyn Virginia, daughter of Mary Eyre and Joshua Ladd Howell,
was born July 7th 1877, at about half past 2 o'clock p.m.

Joshua Ladd Howell died on the 19th of August 1893

Sarah Chauncey Savage died on the 20th of May 1895