The Holy Bible Containing the Old and New Testaments,
Philadelphia, Printed for the American and Foreign Bible
Society, by the Bible Association of Friends in America,
1848. Hills #1367.

On the title page is written: "Abel Spencer's Bible".

This Bible is in fair condition. The binding has been reinforced
with a piece of leather around the spine. The front flyleaves
are missing. There are a couple of pieces of ephemera in this
Bible. 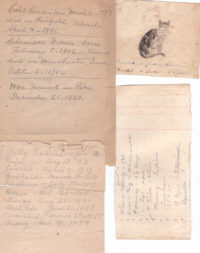 [Drawing of a Cat on a small slip of paper]