Original binding still intact, but front and rear flyleaves torn
or missing. All pages present from my examination. The binding
is rough, with chips on the front cover and and about a 1"
piece missing from the spine.

The front signature says " The Property of Henry F. Fitz Gerald
July 4th 1818". I do not know how or if this Fitzgerald is related
to the Watkins family. 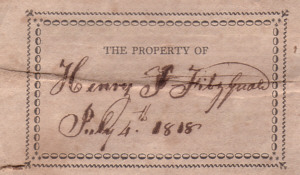 Per unconfirmed Internet sources, this family is from Virginia.

Thompson Watkins & Ann Taliaferro were joined in the Holy
estate of wedlock on the 7 of July 1796 on Thursday, 1 oclock
P.M.

Zacharias T. Watkins & Edna Eliza Bibb were joined in Holy
Wedlock on the evening of the 20th of Apl 1824

Frederic James Watkins Died on the 10th of September at 3 oclock
P.M. 1801