The Holy Bible Containing the Old and New Testaments,
Philadelphia, Kimber and Sharpless, undated, but estimate
around 1830 (K& S published between 1824-1842 or so).

The Bible is in good condition. Original binding intact, although
it has a spine crack and the cover hinging is split. The pages are
all there, although the engraving opposite the OT title page is
badly ripped.

The documents inside this Bible place the family in Butler County,
Ohio, from at least the last half of the 19th century.

Some families store all sorts of ephemera in the Bible, and at first
I thought this was an exception. Upon closer examination, I found
many pieces of cloth inside, as well as a couple clippings and some
torn newspaper scraps, from the civil war. 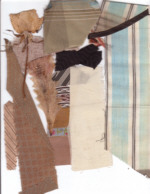 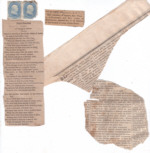 There are many misspellings and grammar issues in the original. I
did not pepper this transcript with "sic"s, instead, check against scans
of the original at Bible Records Online, http://www.biblerecords.com .

Peter Deardorff and June Hunter was married August the 19 1818

John I. McChesney and Maria Deardorff was mariaed January the
31st 1843

Jane Deardorff was born November the 10 1799

Maria Deardorff was born on Sabath July the 4 1819

Elizabeth Deardorff was born on Satturday June the 29 1822

Certificate of Ownership
Middletown Cemetary
The Trustees of Middletown Cemetary hereby Certify That
Peter McChesney is the owner of Lot Number
Two (2) Range Four (4) on the Plat of Said Cemetary Grounds in the
County of Butler and State of Ohio containing 240 Square Feet
for which the said Peter McChesney has paid the sum of
Twenty Four Dollars, which entitles the said
Peter McChesney to use the same for sepulture purposes.
Signed this 7th day of November 1872
William B. Oglesby
Secretary
[another illegible signature]