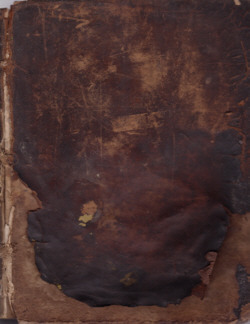 The Holy Bible Containing the Old and New Testaments, Together with the
Apocrypha, Philadelphia, Mathew Carey, 1812. Hills #212, 1812/1812 with
the double-line headers of the first page of each testament.

This Bible has survived a fire and has resultant brittleness of paper and
water damage, and well as the cover being char-cooked. That said, this
book is surprisingly complete and not worn at all. The binding is solid
and there are no loose leaves. The maps and engravings (not explicitly
mentioned in Hills) are in near-mint condition, and I usually see those in
tatters.

If this were a car, it would be "fully loaded". It has:
--Table of the different characters and offices mentioned in the Bible
--Chronological Index of the years and times from Adam to Jesus Christ
--Analytical Dissection of the Books of the Old and New Testaments
--Family Record, for marriages, births, deaths, etc
--Geographical Sketch of Judea
--Chronological table of the most remarkable events recorded in the
scriptures, from the creation to the death of Christ
--Table of the divisions of time among the Jews
--Alphabetical table of the Proper Names used in the Old and New
Testaments, with the meaning of the words in the original language
--Table of Kindred and Affinity
--Concise view of the evidences of the Christian Religion
--Table of Scripture weights, measures and coins
--Table of all those passages in the Old Testament quoted by Jesus
Christ and his Apostles in the New [sic]
--Brown's Concordance greatly improved

and 25 engravings, including at least 3 maps.

No ephemera in this Bible, and it appears to be owned by Revolutionary
War Fifer, Abijah "Harrington". It is this site's custom to reference the
spellings exactly as they are found in the Bible, so most of the people
below are "Harrinton". It is unclear how they are all related, but Internet
references place this family in Lexington Massachusetts as the Harrington
family.

In a strange coincidence, a Bible I obtained and transcribed immediately
before this one also referenced the Raymond family in Lexington,
Massachusetts. They were purchased from different sources.

Transcribed by and in possession of Tracy St. Claire, tracy@stclaire.org .